alvaBuilder is a software tool for de novo molecular design (Mauri, A., Bertola, M. (2022). De novo molecular design with genetic algorithms using alvaBuilder. ACS Fall 2022. https://doi.org/10.1021/scimeetings.2c00526). With its simple interface, it can be used to generate novel molecules having a desirable set of properties (e.g., similarity to a given molecule, MW, logP, SAscore, QED, etc.) starting from a training set of your choice.

The drug-like chemical space has an estimated size of up to 1060 molecules. Searching through such a vast space can be a daunting activity. But Genetic Algorithms can be used to tackle this problem by generating new molecules that have desired properties. Using alvaBuilder, the new molecules can be required to be similar to given target molecules or to have certain molecular descriptor values. You can combine all the desired properties in the definition of a score function. The Genetic Algorithms will generate new molecules by optimizing the defined score function.

The rule based on a target property is used to generate molecules that have a target value for a specific descriptor. The target can be defined as:

You can choose among a set of constitutional descriptors, such as the molecular weight (MW), the number of atoms (nAT) and bonds (nBT), the absolute and relative occurrence frequency of specific atom and bond types, as well as bonds and rings related properties like the rotatable bond number (RBN), the number of rings (nCIC), circuits (nCIR) and ring systems (NRS).

Three base-line toxicities for Fish (BLTF96), Daphnia (BLTD48) and Algae (BLTA96) defined by Verhaar and based on Moriguchi LogP (MLOFP) are provided.

A diverse set of drug-like and lead-like indices are available, including the Lipinski’s rule of five (Ro5), LLS_01 that is based on the well known rule of three (Ro3) index and the quantitative estimate of drug-likeness (QED). 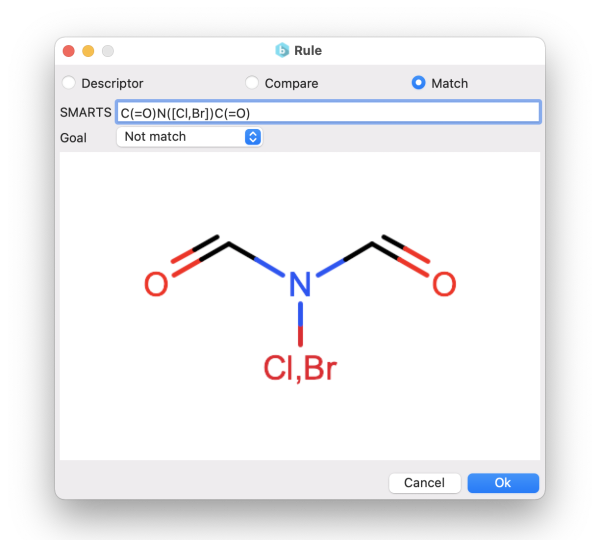 You can choose to generate compounds based on the similarity to target molecules. This can be achieved specifying:

In the first case the similarity is calculated using the Tanimoto distance on the molecular fingerprints. Instead, using the SMARTS, you can define molecular patterns that you want your final molecules to match or not to match (e.g., to avoid unwanted functional groups).

If needed, you can also define a list of molecular fragments that should be contained in the generated molecular dataset.

An easy to use GUI allows you to manage the de novo molecule generation: 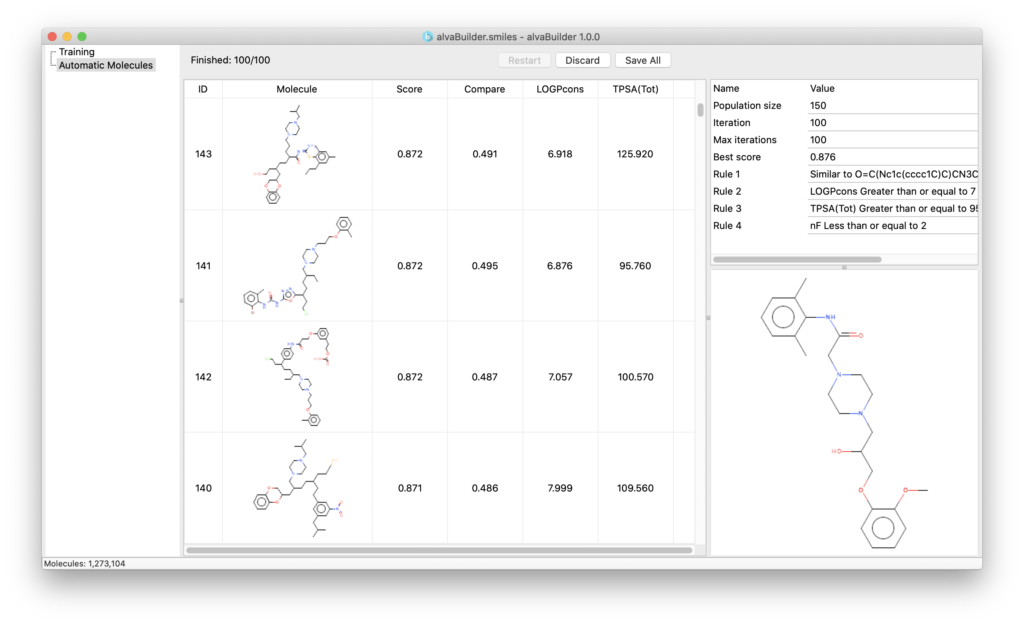 Using a simple step-by-step procedure (wizard) you can define the target properties you want the new molecules to have and start the generation.

The software is 64bit and it’s available for Windows, Linux and macOS.

If you are interested in a quote please get in touch with us.